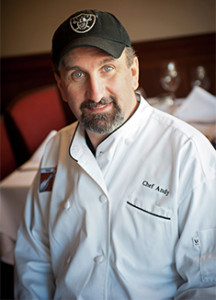 It was a humble beginning for Andy Howery, at the age of 14, he took his first job as a busboy and immediately knew that he belonged in the restaurant industry. His determination was recognized immediately and he climbed the ranks from busboy to dishwasher to fry cook in a matter of a just few short months. Howery visited his father, a Southern Baptist preacher, during the summer months and kept busy working in the construction industry. Money was his key motivator,but his passion always brought him back to the kitchen.

At the age of 18, Howery joined the Navy and served 3 years upon becoming a Service Connected Disabled Vet. While serving in the Navy, Howery kicked it at the Officers Club as a cook, earning extra money and chasing his dream. It wasn’t long before Howery moved to Las Vegas and was employed as “the greatest omelet cook ever” at The Flamingo Hilton. Howery claims that this was his worse job ever and he filled his extra time driving trucks for the Gold Mine and as a 24-hour fry cook under the Chapter 13 culinary union. The rest goes with the old adage, “What happens in Vegas stays in Vegas.”

While continuing to work under Chapter 13 Howery joined the California Culinary Academy. He moved to Huntsville and worked for The Green Bottle Grill as an extern. Upon becoming a Chef, Howery gained experience by working in Atlanta at Brasseri LeCoze, at Pauli’s in Madison and with Washington Square Group as a Chef for The Chophouse, Humphrey’s Bar and Grill and Sazio’s. This is where the friendship between Chef Howery and Chef McDonald began.

Chef Andy moved to Winterpark, Florida for a brief period of time before returning to Huntsville where he worked for Pauli’s and then as the Chef at WaterCress. Howery has been a chef for 32 years and was married in 2011. He and his wife have two young children. What is the secret behind his success? He believes that the experience is about the guest, “If you wouldn’t serve it to my mom, then don’t serve it.” 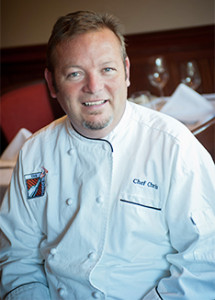 Chef Chris was born in Upstate New York and he graduated from the Culinary Institute of America in 1985 and shortly thereafter began working at Tavern on The Green in New York City. He opened Le Bernardin – one of a handful of four-star restaurants in New York City – in the fall of 1986, becoming sous chef just four years later.

After getting married and moving to Atlanta, McDonald opened the Atlanta Fish Market in 1992. After his two daughters were born, he moved to Winchester, Tenn., to be closer to his wife’s family. He started working in Huntsville in 2002, opening Humphrey’s, Pauli’s Chop House, Sazio and Starfish with the Washington Square Group, then joining Restaurant Partners in 2006 and opening Grill 29 and Market Street Café.

McDonald, who has been working for more than 30 years and opened at least 15 restaurants, loves living in the South. What is the secret to McDonald’s success? He claims that, “Excuses are the stepping stones to failure” and one must stick to it. McDonald says, “Learn something every day and add just the right amount of season to everything.”